Fin and his friends have been delighting kids in the Mossel Bay area this year with the ‘Keep Fin Alive’ puppet show, sponsored by Gouritz Cluster Biosphere Reserve and Garden Route Casino Community Trust and supported by Oceans Research. Sharks play a vital role to keep our oceans healthy, but are a difficult animal to conserve as they’re not as charismatic as other animals. The puppet show aims to teach youngsters that sharks are not the monsters the media portray them to be, and that they’re a very important part of the ocean ecosystem. Teachers from the various preschools describe it as “wonderfully entertaining and informative puppet show”, “kids love Fin and his friends and the cool facts they learn”, “the puppeteers did a FINtastic job entertaining the kids”, “It was great to see that a couple of the reluctant kids, who were scared of sharks before the show, warm up to the characters”. 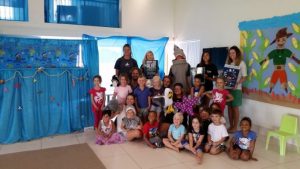