The annual Green Club planning camp for the Green Butterflies began with a welcoming and de-briefing session.  At this session the camp rules are set.  This includes things like greeting other guests, saying thank you, shouting, wastage, recycling etc.  and values such as leaving a place better than you found it and leave nothing behind. The aim of this annual camp is to elect the club’s committee as well as the project managers.  The camp also allows for the induction of the new grade 6’s who were taken though an orientation program to learn the ethos of the green club and begin a leadership development program.

The Codes of Nature hike into the gorge focuses on increasing the learners’ ecological intelligence and opening the opportunity to familiarize themselves with the natural environment, as it is sometimes feared. Through the walk certain observations and remarks were made, the learners were asked to listen carefully as they would have to draw up a list on the codes of nature in their respective groups after the hike. This exercise proved to be an incredibly good one as they had picked up on very subtle observations.

The codes of nature will be a fixed feature on this annual camp and will form part of the leadership program and grade 6 induction.  This walk will be run by the grade 7’s next year as they will need to pass on the codes to the new incumbents. 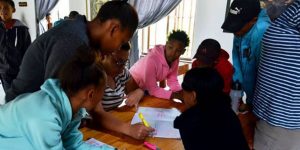