Results of study focussed on medium- to large-sized terrestrial vertebrate biodiversity in Anysberg Nature Reserve and World Heritage Site and neighboring farmland using camera traps show that even if protected areas such as Anysberg Nature Reserve are extremely important for nature conservation, the inclusion of private lands to the conservation process is crucial to conserve the full range of species found in drylands such as the Karoo. Initiatives such as the CapeNature’s biodiversity stewardship programme have a great role to play in conservation, by making private landowners the custodians of biodiversity, along with protected areas.

This project was funded in part by the WWF Nedbank Green Trust. CapeNature is also thanked for allowing access to work in Anysberg Nature Reserve and World Heritage Site. 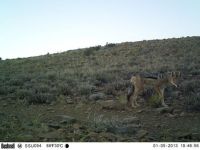