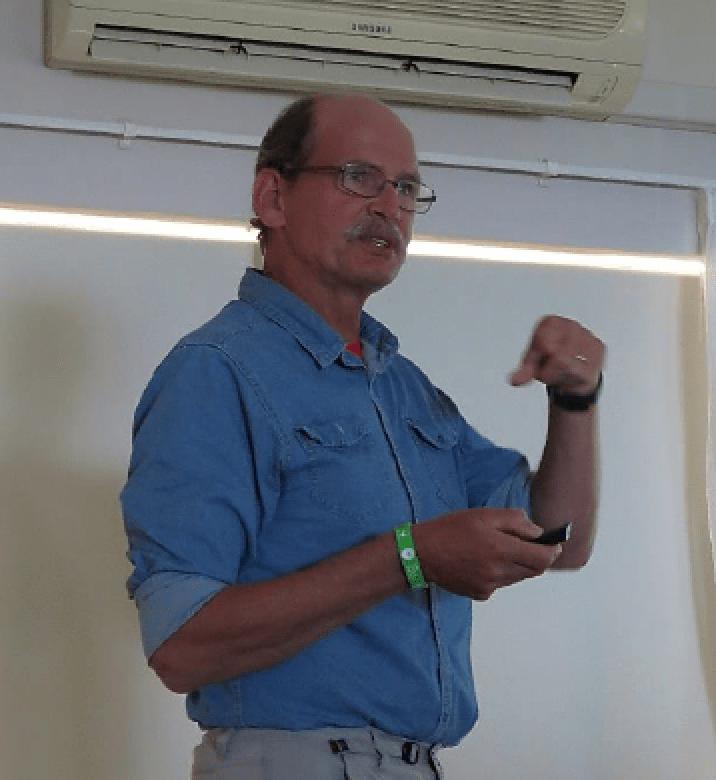 Charles has been a family physician in Canada from 1986 – 2018 and lives in Tumbler Ridge, British Columbia. In 2000 two local boys (aged 8 and 11) discovered a Cretaceous dinosaur trackway below their town. One of them was Charles’ son. They contacted Canada’s trackway expert who taught them what to look for, and since then numerous Cretaceous dinosaur footprints were recorded. The local town became a centre for Ichnology in Canada. This has saved the town from becoming a ghost town and helped diversify the economy. It received support from the regional and mining industries. Numerous fossil tracks were recovered by helicopter, and in 2010 the Dinosaur Discovery Gallery was opened. It boasts the only known Tyrannosaur trackways in the world. In 2014 UNESCO designated Tumbler Ridge as a Global Geopark with Ichnology as the anchor! Along the Cape south coast of South Africa, Charles has applied what he learned in Canada: 350 km of coastline between Arniston and Robberg has been surveyed and more than 250 track sites have been recorded. East of Still Bay tracks of giant horse, long-horned buffalo, elephant, rhinoceros and giraffe have been recorded. In Goukamma WHS tracks of lion, birds, elephant, long-horned buffalo, tortoises, and seals have been found. In 2015, hominin tracks were discovered in the Goukamma area – and it has been established that these 40 footprints are about 90 000 years old. Do these tracks belong to Homo sapiens sapiens? In terms of the preservation of these track sites, they hold great education potential. The Garden Route National Park and Goukamma, Robberg and De Hoop World Heritage Sites harbour the Pleistocene Cape south coast BIG TEN namely: the Cape lion, African elephant, long-horned buffalo, Cape buffalo, Cape giant horse, black rhino, giraffe, hippopotamus, Cape fur seal, and Homo sapiens. These findings are currently in the process of being published in scientific journals. The question now is how best to manage these fossils? Should they be recovered or replicated? Where should they go? What if we do nothing? 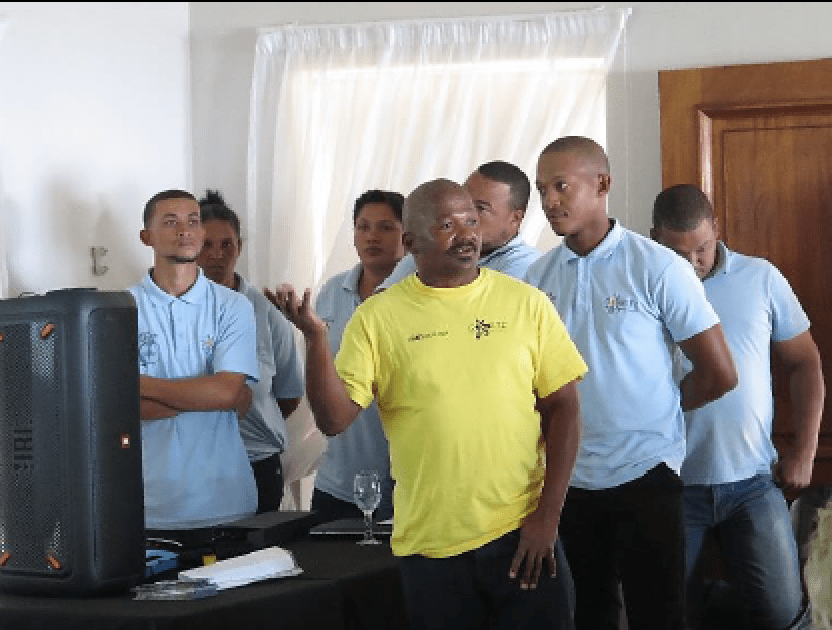 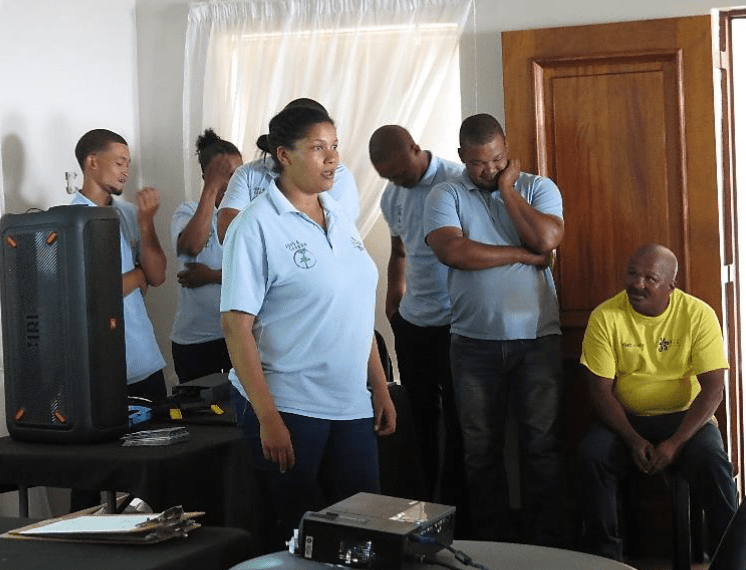 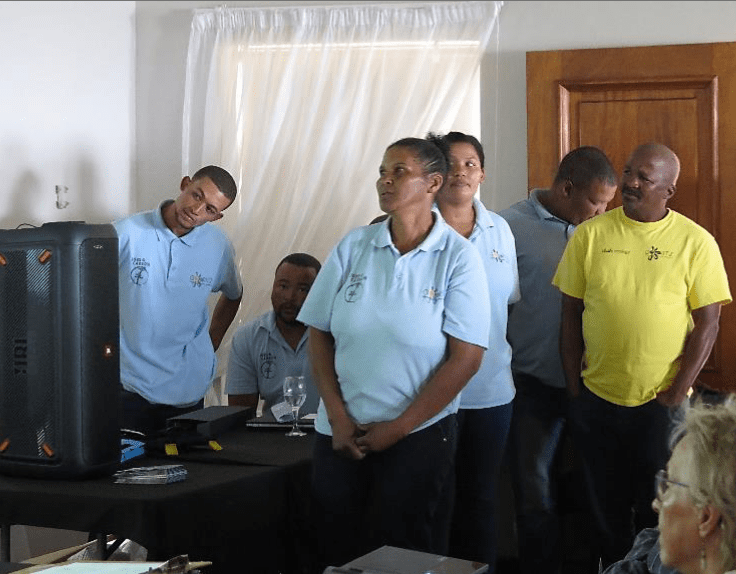 Members of the Jobs for Carbon team gave feedback about their involvement in various initiatives, such as spekboom restoration work on certain properties, management of the #Spekkies nursery in Vanwyksdorp, attending and participating in field outings with learners from local schools, involvement in the layout and landscaping of the gardens at the GCBR office in Riversdale and the Vanwyksdorp Development Institute, participation in the Voetspore programme, engaging various visitors to the Jobs for Carbon project, attending training sessions at the Vanwyksdorp Development Institute, celebration of the Vanwyksdorp NG Church’s 115th year anniversary, etc. 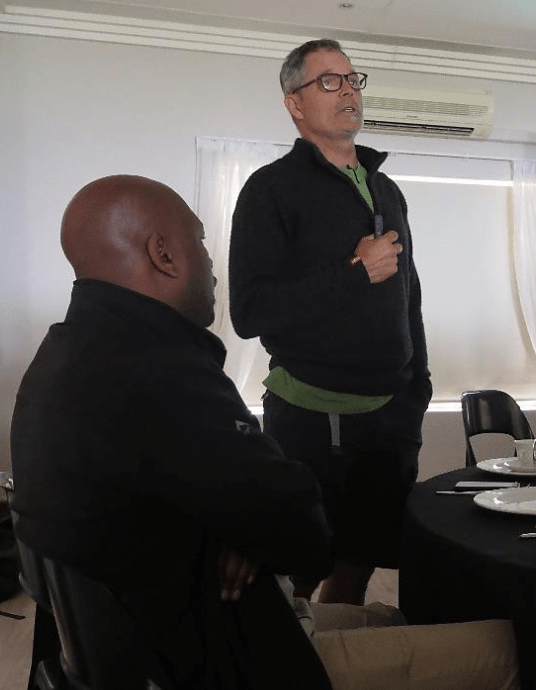 The Swartberg Complex World Heritage Site was initially inscribed by UNESCO in 2004 and the extension in 2015. According to the World Heritage Site legislation a protected area management plan has to be compiled and approved by the relevant ministers. This process is currently in the public participation phase. The Swartberg Complex World Heritage Site and Nature Reserves is a massive protected area which consists of three clusters: Swartberg Cluster (131 255.7 ha), Gamkaberg Cluster (39 997 ha) and Kammanassie Cluster (27 055.5 ha), totalling 198 308.2 ha. Five focal values have been selected: 1. Fynbos Mosaics; 2. Succulent Karoo and Subtropical Thicket Mosaics; 3. Freshwater Ecosystems; 4. Cape Mountain Zebra, and 5. Heritage

Resources and Rural Landscapes. In addition there are numerous human wellbeing values that we gain from these focal values and these are cross-cutting. Such as provision of water quality and quantity; clean air; pollination services; grazing for wildlife; natural products; aesthetic beauty and sense of place; access to employment opportunities (e.g. related to tourism, management of values, etc.); environmental and education opportunities; access to capacity and skills development opportunities; restoration and carbon sequestration; etc. Threats to these focal values include: a changing climate (drier and hotter); inappropriate fire regimes (larger and more frequent); invasive alien vegetation; over-abstraction and pollution of surface and groundwater; lack of genetic mixing of Cape mountain zebra subpopulations; hybridisation of Cape mountain zebra populations with other equids; biodiversity crime; habitat fragmentation and alteration; degradation of landscapes; littering and wastage of water and energy resources; over-stocking, over-grazing and invasion risks; etc. Strategies and actions to address these threats have been identified and described in the management plan. Next steps: Document has been reviewed internally and will be uploaded to CapeNature’s website. External consultants have been appointed to run with public participation process during December and early January 2020. The forum will be notified of the availability of the document for inputs once it has been loaded onto the CapeNature website. CapeNature would welcome comments from the GCBR forum members. 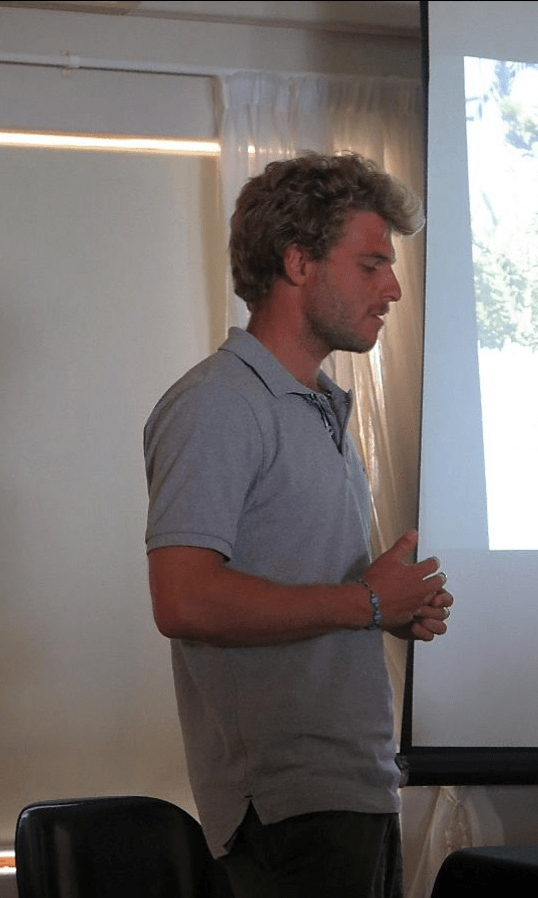 Coexistence of fire-dependent fynbos and fire- avoiding forest and thicket in the Cape Floristic Region is a hot topic. Fynbos species are dependent on fire to stimulate recruitment, while thicket species require long fire-free intervals for recruitment into fynbos. When fires are kept out of fynbos, thicket vegetation expands into and outcompetes fynbos. Little research has been done on the fire ecology of dune communities and not much is known about the response of thicket shrubs to different fire regimes. Recent extensive fires in the Cape St Francis and Knysna areas presented an opportunity to assess the response of thicket shrubs to fires of varying intensity. Post-fire survival and resprouting vigour of thicket shrubs in relation to fire intensity and pre-fire shrub size were studied. It was found that: all

thicket species surveyed were capable of resprouting after fire and there was a high survival rate after the fires at both sites; fire intensity is not a major driver of mortality of thicket shrubs, and thus high- intensity fires are not an effective tool for limiting the extent of thicket in the dune landscapes. Frequent fires of medium intensity may be more important to try and limit thicket encroachment into fynbos areas as such fires may kill developing seedlings. The impacts of such a fire regime on dune fynbos, however, needs to be urgently investigated.

Since no research has been done on the impacts of fire on birds dependent on dune thicket, this aspect was also included in the study. Dune thicket is richer and more abundant in bird fauna than fynbos – due to the complex structure and abundance of fruit and insects for birds to forage. Fire seems to have an effect on thicket bird species richness but not on bird abundance. Fire in thicket does not result in a complete change in bird species, which suggests that most birds utilizing thicket show resilience to fire in the short-term (2 years). Not all birds are, however, equally resilient to fire as several bird species disappeared after fire (such as the forest bird species). Mature unburnt thicket provides habitat to various forest birds in a fynbos-thicket landscape. Some patches of thicket needs to remain unburnt to prevent local depletion of these birds. Insectivores and generalist birds are the most common feeding guild in burnt and unburnt thicket. Granivores and carnivores (the less common feeding guilds) are more abundant in burnt thicket. Frugivore abundance was very low in burnt thicket, which can limit post-fire dispersal of thicket seeds from unburnt thicket.

(Note: Summaries have been verified by presenters)