The New Zealand Christmas tree (Metrosideros excelsa) was introduced from New Zealand into South Africa via the horticultural trade, and has subsequently become invasive in the Betty’s Bay area of the Western Cape. It is a tall, evergreen, mainly coastal, pioneering tree of the Myrtaceae (‘Bluegum’) family. Information gathered from plant databases indicates that it occurs mainly along coastal areas with a mild Mediterranean or a mild subtropical climate.

The invasion ecology of most potential invaders is often not well understood, hence, it is important to gather baseline information before a decision regarding effective management actions can be taken. In addition, this species has many conflicting invasive and non-invasive traits that need to be investigated to assess its invasive potential for South Africa. This species is listed as category 3 in the 2001 list of the Conservation of Agriculture Resources Act 43 (1983), which means that no plant may be propagated or sold, but existing plants do not have to be controlled. No formal risk assessment has ever been done, hence, its listing in national legislation is not based on scientific facts.

This study has focussed on various aspects. A rapid roadside survey (5528km driven by time of presentation) and a walk and search survey to map the distribution of this species in various coastal towns from Brittania Bay in the west up to Jeffrey’s Bay in the east was undertaken. A total of 6035 adults were found, 1709 juveniles and 5 seedlings. 25% of the adults and 82% of juveniles were naturalised, but this was mainly in the Betty’s Bay area. Despite the fact that surveys were done outside the species’ natural reproductive cycle, many were found to have capsules or flowers present. Either the natural flowering trigger is absent, or individuals could be in highly favourable conditions (e.g. cared for in gardens) ensuring constant seed release throughout the study area, leading to a high propagule pressure and increased risk of invasion if favourable conditions are available. In addition, most individuals were multi-stemmed (resprouters), hence, it will be harder to treat than if it were a single stemmed individual. Transects were surveyed in the burnt infestation of Betty’s Bay 9 months after the January 2019 fire to assess resprout vigour and survival. Fifty percent (50%) of plants surveyed had survived the fire. Fire intensity had no influence on survival rate.

The size of the pre-fire tree is strongly linked to the number of resprouts produced – as stem diameter at ground level increases, so do the number of resprouts. Soil collected from burnt and unburnt areas of Betty’s Bay and left to germinate for three months resulted in no seedlings of M.excelsa emerging. The number of capsules per tree was counted, and the number of seeds per capsule: an average of 5.8 million seeds are released per tree annually and as the tree size increases, so too does the number of seeds released. A tetrazolium stain test was done to assess viability of those seeds and found that 21% of mature seeds were viable. Burnt areas thus rely on colonization from unharmed trees. Management recommendations will come down to herbicide trials, prevention of this species into areas and the eradication or suppression where it is currently present. Even though this species does have some benefits (e.g. nectar for indigenous animals), it is still an invader that leads to a loss of biodiversity. 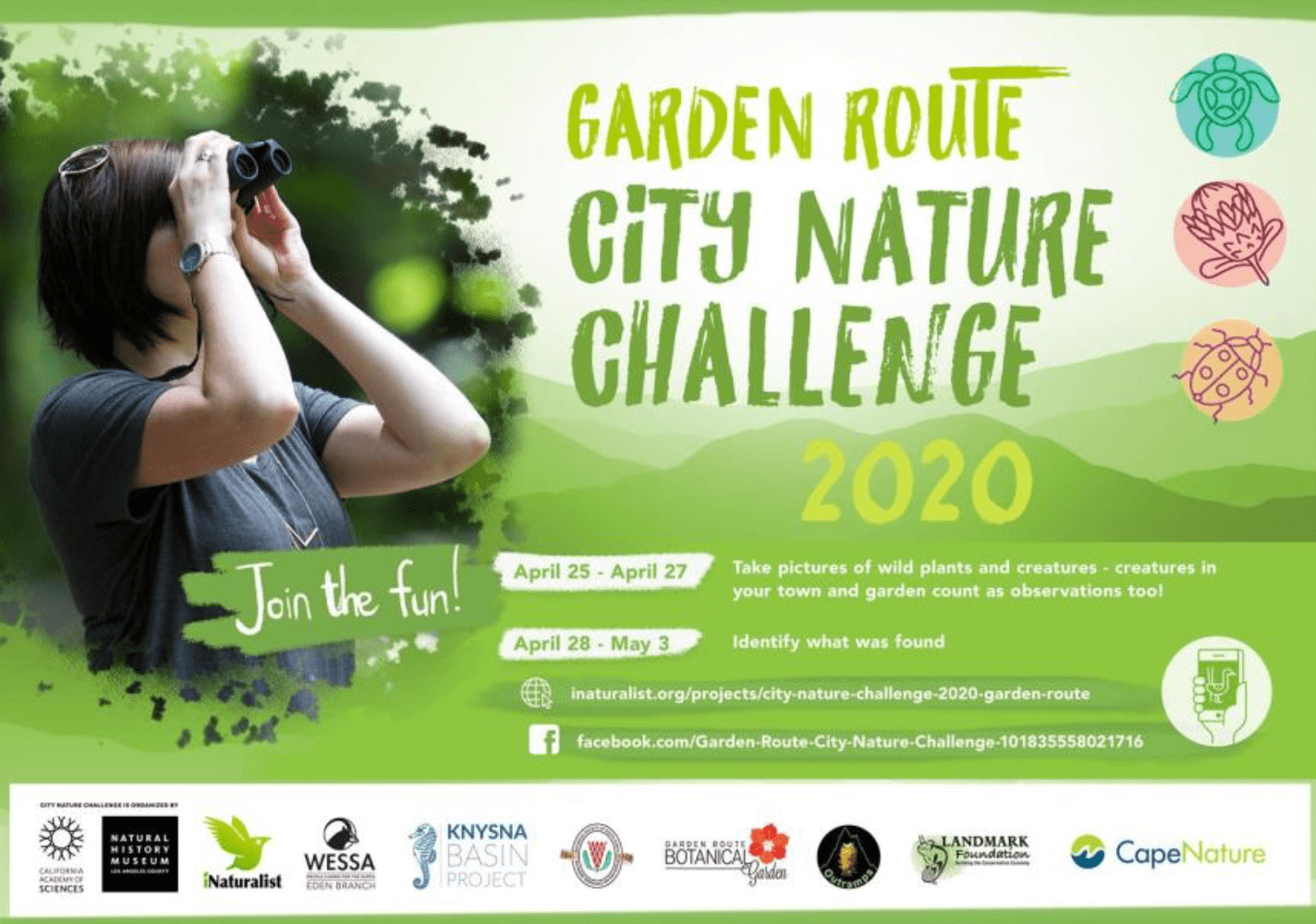 Cities compete against one another: What biodiversity is there? How many species? How many people are interested enough to take part and record the plants and creatures around them. This is what City Nature Challenge (CNC) is about. The Garden Route District area has taken up the challenge this year. With more than 250 cities across the world we can discover and showcase what makes our beloved area so unique. Photos, videos and sound clips of all things natural – but also captive creatures and cultivated plants within the GRDM boundaries – must be recorded from Friday, 24 April to Monday the 27th of April.

All the observations are then uploaded onto iNaturalist.org. One can use the website on a computer or download the free App on a smart phone. Internet is needed for this. Time to upload and identify observations is given till Monday the 3rd of May. Of course, identifications can be given by anyone in the world during this time – an internet connection is the only requirement! All observation records matter and are included in global scientific databases.

If you live in, or plan to be in these municipal areas, please join the fun: Hessequa, Mossel Bay, George, Knysna, Bitou, Kannaland, Oudtshoorn.

Last year Cape Town took part in City Nature Challenge 2019 – out of 159 cities, they won! Gaborone, Tshwane, Durban and Nelson Mandela Bay have also taken up the 2020 challenge. Since 2019, Cape Town boasts to be the most biodiverse city on earth. Can we beat Cape Town? Of course we can! Anyone, everyone can take part! Join in, just do it! [Note: This competition has subsequently been changed to a ‘lockdown’ version due to restrictions imposed as a result of the Covid 19 pandemic.]

In conservation management we often speak of restoring ecosystems. But to what state do we restore them to? Historical writings on the state of ecosystems do not give us enough detail to be able to select a state to actively manage towards, and even if they did, the point labours under the fact that ecosystems have not reached a pinnacle with the process of evolution.

What we had then, and even today, is a snapshot of the ecosystem as it responds to a variety of environmental variables – including humans. So how should we choose to manage ecosystems? We should rather strive to make ecosystems resilient… so that the systems are able to continue to respond to environmental variables and continue to evolve. One of the ways that we can attempt to understand the mechanisms we need to put in place to make these systems resilient, it to study the habitat specialists that call these systems home. Habitat generalists, such as the Blue Crane in the Overberg, are able to respond to changes in the environment and adapt exceedingly well to the development of agricultural pasture, but the Southern Black Korhaan or African Grass Owl are very specific in their habitat requirements, and we have seen their numbers affected with the loss or fragmentation of ecosystems. By understanding the needs of habitat specialist – from amphibians, reptiles, birds, plants, fish and mammals, we can adapt the way we connect corridors and implement management interventions to ensure the health of the ecosystem over the long term, and thereby also conserve the species that call those ecosystems home. 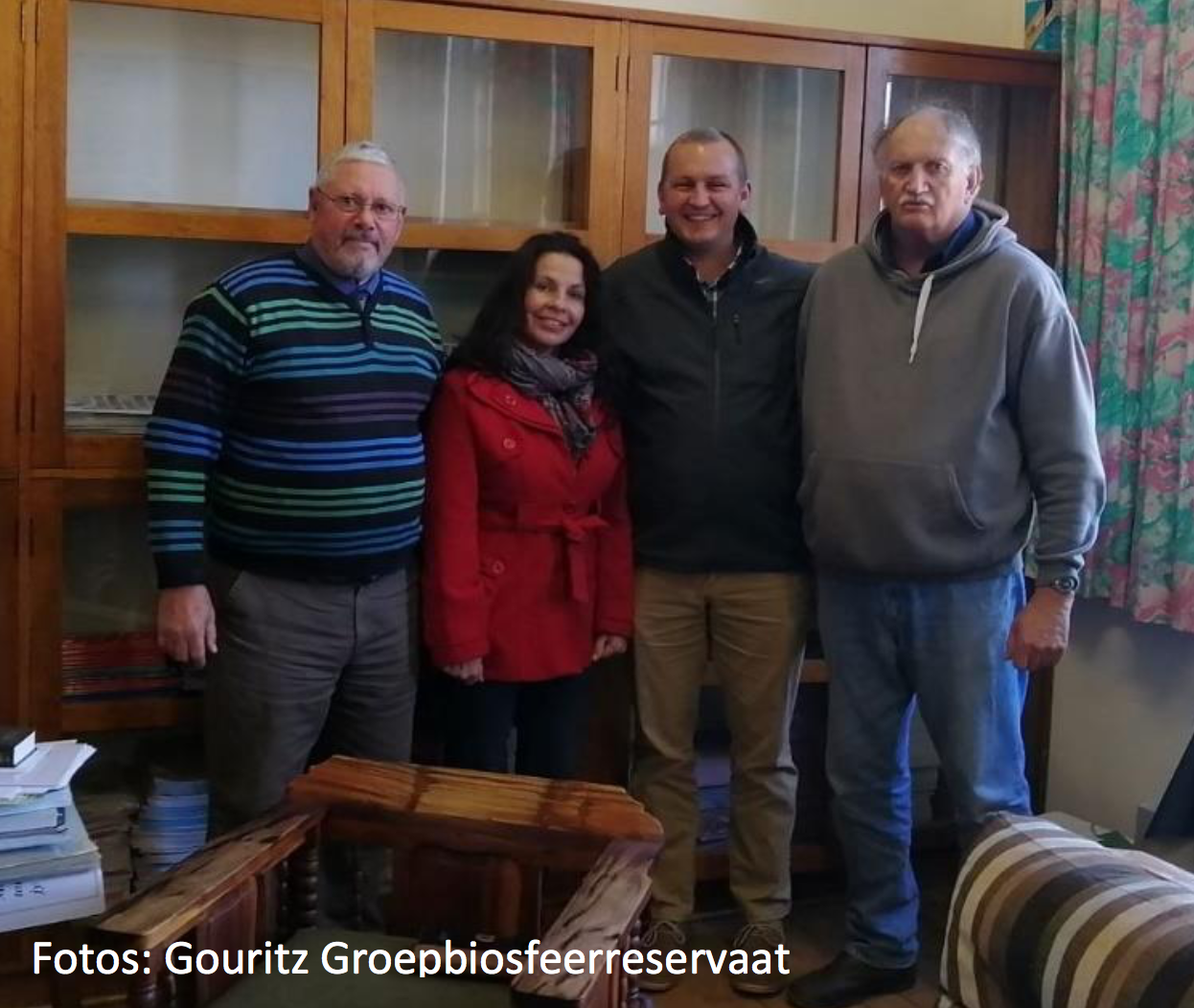 (Note: Summaries have been drafted or verified by presenters)