The Elandsberg Hakea Challenge: report back and way forward

One of the greatest threats to key water resource areas in the Mountain Catchment Areas of the Western Cape are invasive alien trees1. Dense infestations of hakea and pine trees generally result in more than a 10% increase in water loss to the atmosphere2, and thus if these trees are not controlled then this will result in a reduction in yield of many millions of liters of water, with potentially severe impacts on the businesses and farms which depend on this water, especially during droughts. This has particular relevance to Ladismith and the surrounding farms, with almost all of our water supplied by the Klein Swartberg Mountains.

A few years back, Cape Nature were actively clearing in the mountains above Ladismith, but they are now faced with shrinking resources to carry this out, and have done almost no clearing here in the last few years. Therefore, local action is desperately required. Over the last 15 months, three volunteers (myself, Hugh Sussen and Samantha Adey) have been clearing invasive alien trees once or twice a month. Over this time, we have systematically covered over 1 500 hectares of mainly sparsely infested areas and have cut down more than 4200 trees. However, if we are going to win the battle then several more people are required to become involved, particularly to help with the remaining more densely infested areas, which cover at least 70 ha (and possibly much more) of the lower to central areas of the Waterkloof catchment, the primary water source for Ladismith Town. Further infestations in the upper Waterkloof catchment are also strongly suspected. 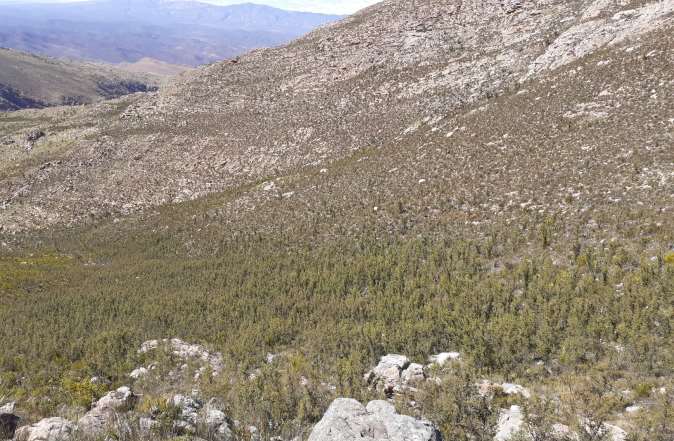 In an attempt to draw more people into clearing invasive alien plants, we organized the Elandsberg Hakea Challenge with the goal of cutting down at least 3000 invasive alien trees. The challenge was advertised through local contacts and social media, and included two clearing events (09 and 15 November) for which the GCBR kindly sponsored gloves and saws.

A total of eight volunteers began the first Elandsberg hakea challenge early on the morning of 09 November
2019. Although the long steep ascent proved too much for one of the volunteers who turned back, the seven
other volunteers all made it to the site (see below) to be able to clear the hakea. 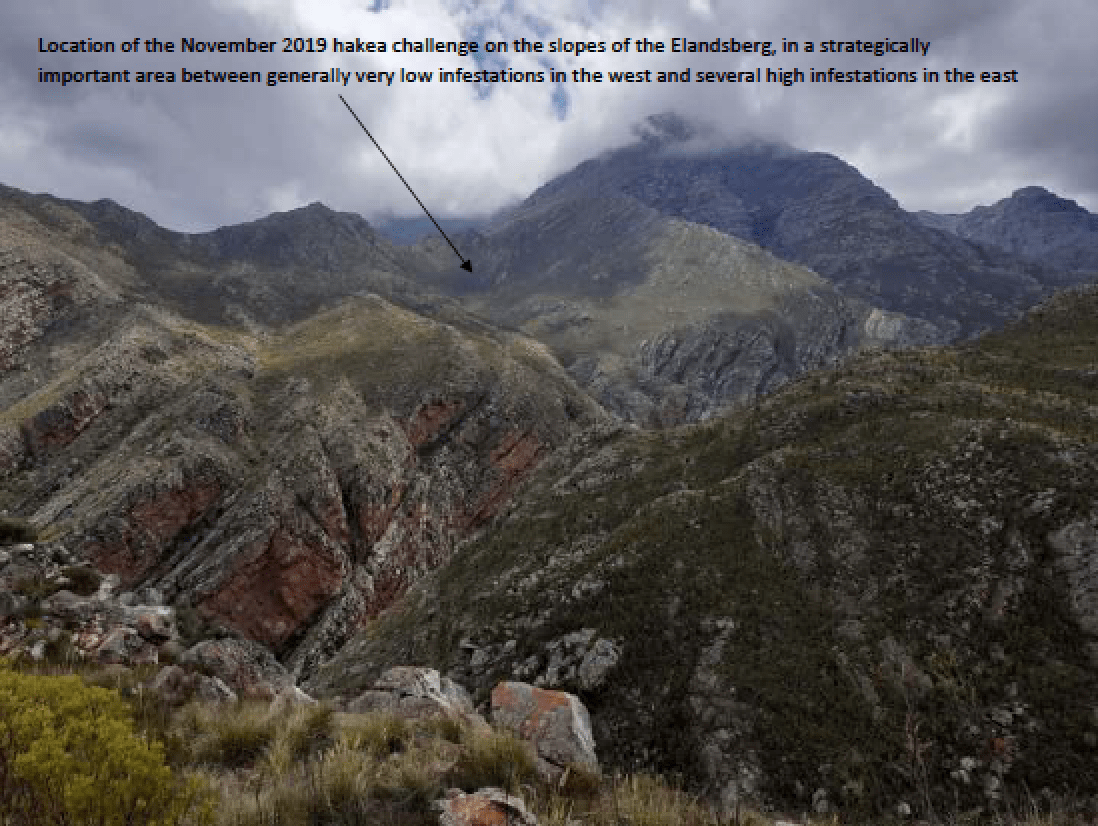 The group included Ladismith residents, Zelde Coetzee, Hugh Sussen, Samantha Adey, Donovan Kotze and Wesley Morgan, as well as visitors Roderick Juba from Living Lands, Joubertina and Kgaugelo Shadung and Malvin Baloyi from Cape Nature, Oudtshoorn, who we were very pleased to have join us. Location of the November 2019 hakea challenge on the slopes of the Elandsberg, in a strategically important area between generally very low infestations in the west and several high infestations in the east Given the small number of participants, and that two of the participants could only join the event after the starting time, it was decided to work as a single team to clear a 2 ha block of hakea, which consisted of approximately 0.3 ha which was highly infested and 1.7 ha which was moderately infested. Despite our small number, we managed to meet the challenge of cutting down about 1650 trees and clearing the 2 ha, for which handsaws and gloves sponsored by GCBR were much appreciated. Thanks GCBR! 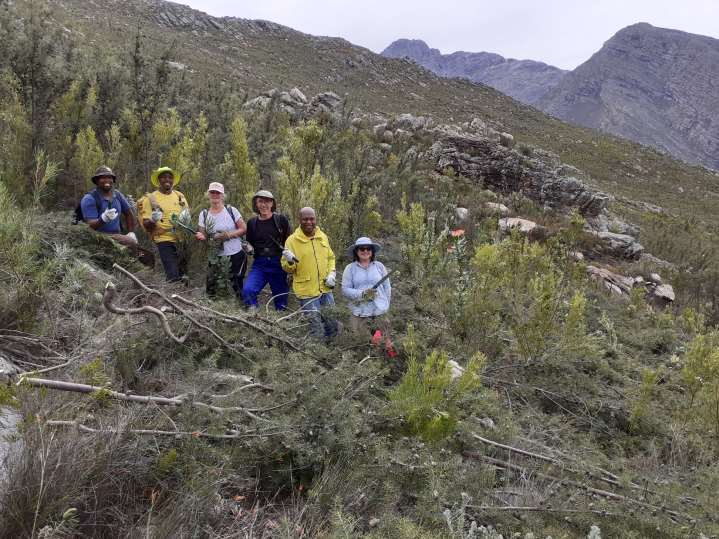 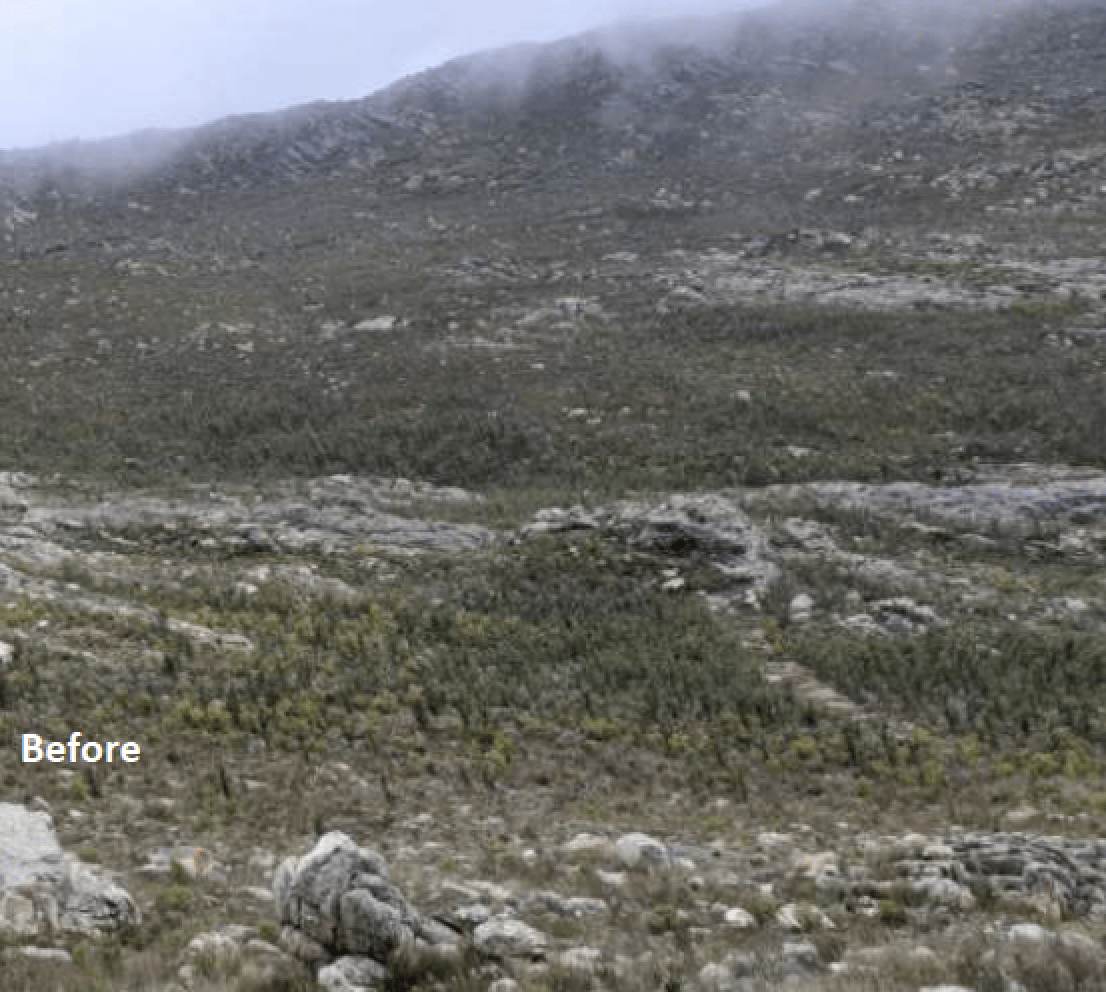 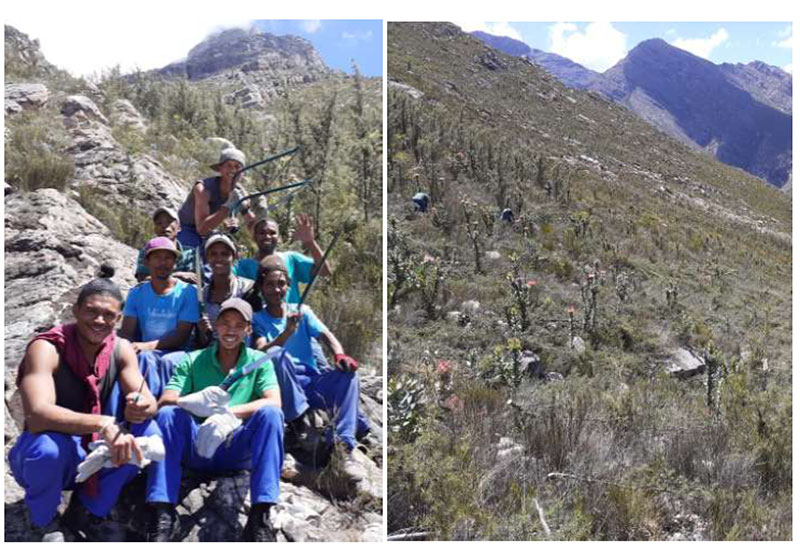 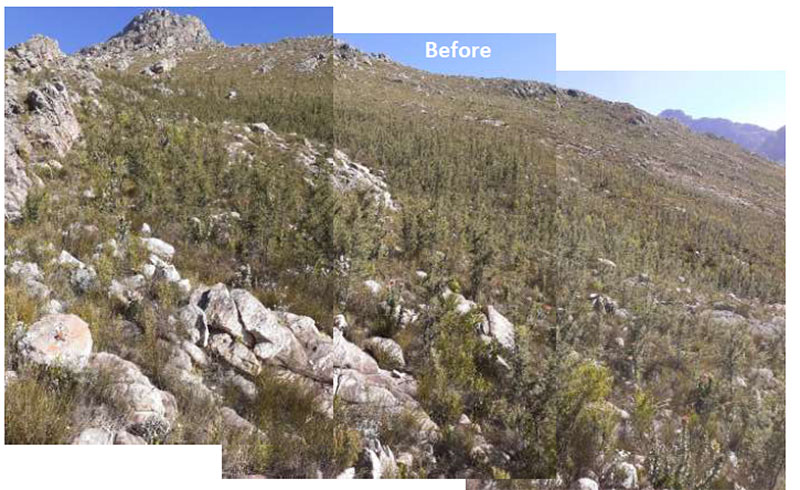 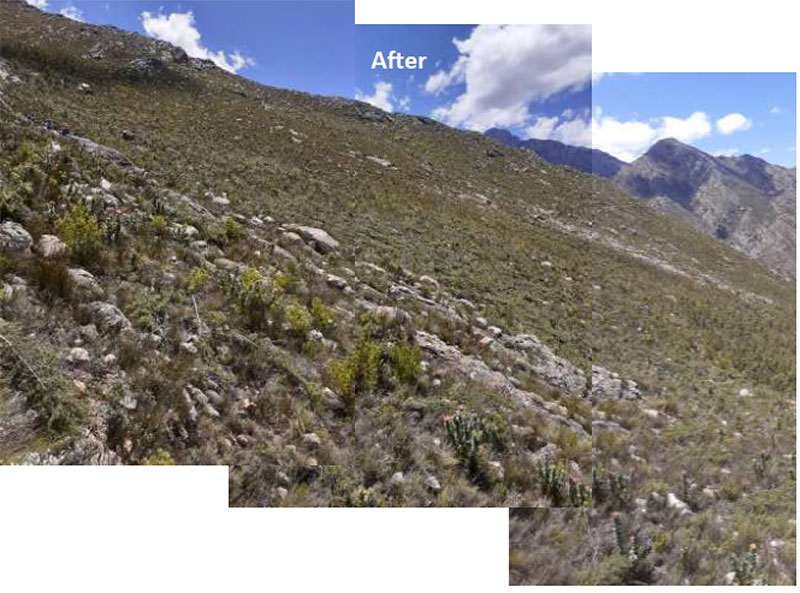 Although more than 4000 trees have been cut and about four hectares were cleared in the challenge, at least another 30 hectares of hakea infestation remain on the Elandsberg slopes nearby, which continue to threaten the mountain environment and the water resources of Ladismith. Few local volunteers participated in the event on 09 November despite the event being actively promoted. Thus, although we will continue to promote clearing by volunteers, especially in the less heavily infested areas, further clearing by volunteers alone is likely to be slow. In contrast, further use of a farmworker team is likely to provide much more rapid progress.

The team of farm workers worked well and indicated their eagerness to participate again in the future. The sponsorship of these workers by two local farmers was very generous, particularly considering the extreme pressure that farmers are already under in the current drought. This sponsorship has set an excellent example for the future, and an appeal could be made to local businesses and concerned individuals to sponsor the team for additional clearing events. Seven of the eight farmworkers in the team are temporary workers, and with the drought there is significantly less work available on the farms for workers such as these. Thus, clearing of hakea provides a potentially valuable income source for these individuals and their families during this difficult time.