The annual Green Club planning camp this year was held at Herbertsdale Primary. The aim of this annual camp is to elect the club’s committee as well as the project managers.  The camp also allows for the induction of the new grade 6’s who were taken though an orientation program to learn the ethos of the green club and begin a leadership development program.

Towerland Nature Reserve hike – The hike starts with the bluegums and a few other aliens as we pass the old farm house, however as we ascended up the mountain it changes into mountain fynbos. The CODES OF NATURE refers to a program aimed at increasing the learners ecological intelligence and opening the opportunity to familiarize themselves with the natural environment, as it is sometimes feared.

The learners struggled a little with getting “tuned” into the environment. They were quite involved with their own conversations and it took about 10 minutes for them to realize they were in front of a huge valley overlooking Jakkalsvlei. We did some calming down and breathing exercises and had to practice silence for more than 10 minutes for the group to actually connect to their space. Through the walk certain observations and remarks were made, the learners were asked to listen carefully as they would have to draw up a list on the Codes of Nature in their respective groups after the hike. This exercise proved to be an incredibly good one, considering they do not listen much but they were able to pick up on some of the values. 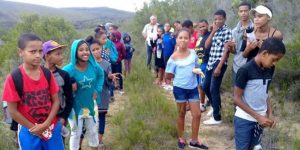