The GCBR launched a new initiative recently around marine conservation. “Walking under the Rocks” is organised together with Oceans Research in Mossel Bay. The latter have an ongoing research and conservation project on intertidal organisms at Kanon Private Nature Reserve. Its aim is to evaluate the effectiveness of small nature reserves on the marine environment as well as understanding the driving factors of the intertidal ecosystems at Kanon.

Intertidal ecosystems have a huge impact on subsistence provisioning and on ecotourism. But there is not much local knowledge about the intertidal organisms – the species living between the two tide levels. Everyone knows dolphins, whales and sharks but very few realise the unique combination of living organisms under our feet.

We thought it would be fun to add a citizen science component to this project. This took the form of four beach workshops at different locations where the public were invited to learn how to recognize, appreciate and thus conserve the intertidal organisms.

To make it easy for the public the workshops were held on Saturday mornings. Suitable dates had to be picked according to the cycle of the tides to get the most suitable conditions. The first event took place on 21st May in Gouritsmond, followed two weeks later on 4th June at Stilbaai. Again two weeks later we were at Tergniet on 18thJune. The final event at The Point in Mossel Bay had to be postponed several times due to weather conditions, but finally went ahead on July 16th. “Walking under the Rocks” gained popularity as more and more people came to take part at each workshop. We even had brave hearts all the way from Oudtshoorn who joined us more than once (dankie Louis en Thea Jordaan!). In total the events attracted around a hundred people – young and old.

Acheley Nortje of Oceans Research did a superb job in explaining with flair and passion the basic functioning of the intertidal ecosystem. After a short lecture the search began for interesting little creatures living under and around the rocks near the tidal pools. Acheley is a veritable fountain of knowledge of the subject and everyone was constantly amazed at how much beautiful life exists right there in front of our feet. Some people who walk the beach every day admitted they never suspected what was there – never mind the relationships between them. We found things like: sea anemones breakfasting on a crab – whelks as serious predators – sea urchins of so many colours – many gorgeous starfish – brittlestars – octopus – sea cucumbers – colourful sponges – lots of chitons – bright orange nudibranch – alikreukels – and thousands & thousands of periwinkles.

Walking under the Rocks has now ended, at least for now. But we would be keen to hear from you what you think of the initiative. Should it continue? Are you interested in becoming more actively involved in the research? Would you like to start your own resident citizen science project in your local area? Suggestions welcome!

Walking under Rocks was co-sponsored by Mossel Bay Municipality. 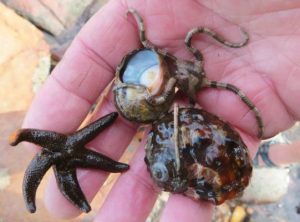