The WINDPOMP SJERRIE CHALLENGE name originates from what water meant to us. Symbols of water like the windpomp, illustrates the importance of sustainable resource management. The awareness about conserving water became evident in the whole of the Western &, and Southern Cape.

The 2017 event was presented to almost 300 cyclists. It became evident that the over 30 000+ visitors and the almost 1000 cyclists in Stilbaai over the festive season, are a captive market. Plans are to develop the event for a growth of up to 1000 or more cyclists in future.

The importance of the Jobs 4 Carbon team was evident as they played an important role at race registration, as marshals on route, at water point and to manage the traffic. The event would not have been a success without the presence of Jobs 4 Carbon. 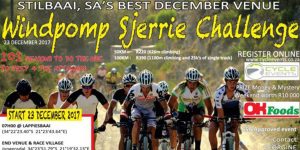 Windpomp Sjerrie Challenge hosted by IALA with support from J4C and OK Foods.