2 732 WONDERBAGS  have been handed over to  the Eden District Municipality to the value of R400 000 for distribition to our vulnerable communties of Knysna, Bitou, Mossel Bay, Hessequa, Kannaland and Oudtshoorn in  a joint Provincial and Municipal Climate Change Adaptation Initiative.

The Initiative kicked off in Touwsranten where 200 Wonderbags were distributed after Vernon Gibbs-Halls of Eden Municipal Environmental Unit demonstrated how the unique cooking bag is to be used. Last week, it was Touwsranten’s turn where 180 Wonderbags were presented to the community.

A Wonderbag is an insulated bag in which people can cook anything from meaty stews or vegetable curries to simple rice and soups. You heat up your pot of food on the stove, kick-starting the cooking process, and then place it in the Wonderbag.

Wonderbag’s clever insulating properties allow food that has been brought to the boil to finish cooking while in the bag without the use of additional energy. So, families can cook appetising hot meals, while saving energy – and money. It also means less time tending cooking food – time that can be better spent looking after children, earning an income or doing essential chores.

As of June 2012, 500K Wonderbags have been distributed throughout South Africa, set to improve the lives of over 2 million people, made possible by carbon offsets.. With key partnerships in place, we hope to see that figure rise to at least 5 million in the next few years.

Vernon Gibbs-Halls explained that the Wonderbag has many benefits…

Adaptive measures like this one form part of building resilience amongst vulnerable communities to the ever-increasing effects of climate change and the launch was therefore aptly chosen for the Earth Day Celebrations.

A special word of thanks to Wendi and Manfred Skowrenek, Pieter and Hanna Coetzee and Tony Gibbs-Halls for all your help to making the day a successful one! 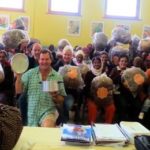 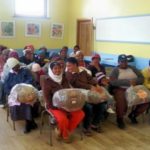 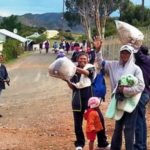